Last week my neighbor with the nice garden called and told me his laptop was dying. Surfing the web, Facebook, Skyping, allegedly nothing was working anymore as the notebook kept switching off automatically within a short time. On the very same evening I checked the “terminally ill surf machine”. I installed ThrottleStop to read out its temperature and make the processor sweat with the integrated CPU benchmark. And indeed, the processor’s temperature climbed up to more than 90°C while the fan wasn’t showing any vital sign. After a couple of minutes the notebook switched off to save the processor from death by overheating. Since notebook fans are hard to find, I set up ThrottleStop in a way that the program would start with Windows right away and prevent the processor from speeding up. Then, the processor operated with a clock speed of just 933 MHz – which reduced its performance by half, but which was still enough for surfing/Skyping and using Facebook – and thus, even without any active cooling, it didn’t exceed 85°C at any time. In the following days my neighbor searched all PC stores for a new fan, and today he’s found one. After work I came over and disassembled his notebook. Besides my tool box I also took along my Sigma DP3 Merrill, the Marumi DHG200 and the Raynox DCR-250 to document the “procedure”. 🙂 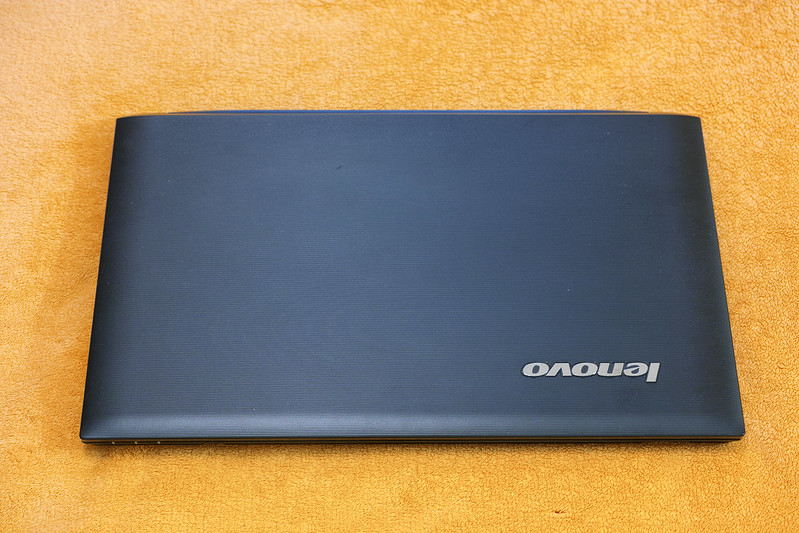 You always start by removing the battery and the maintenance flap (if there is one). Beneath there are almost always more screws you need to unscrew, in order to be able to remove the upper cover and the keyboard. 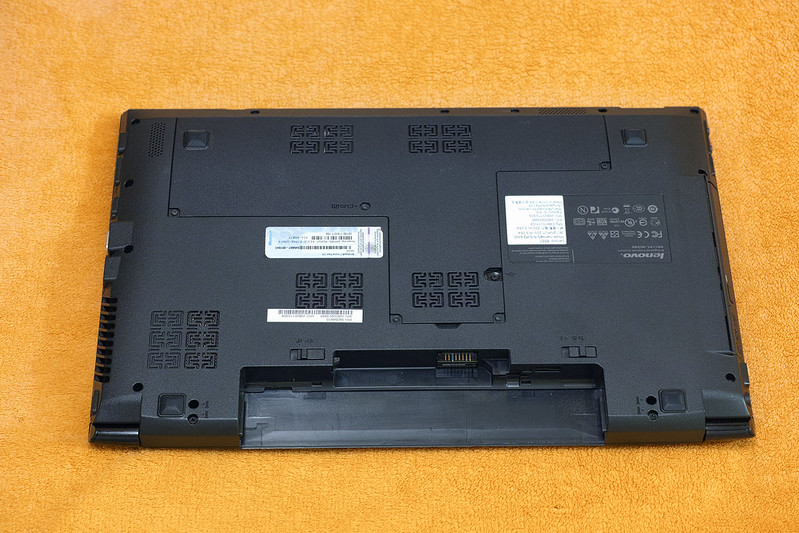 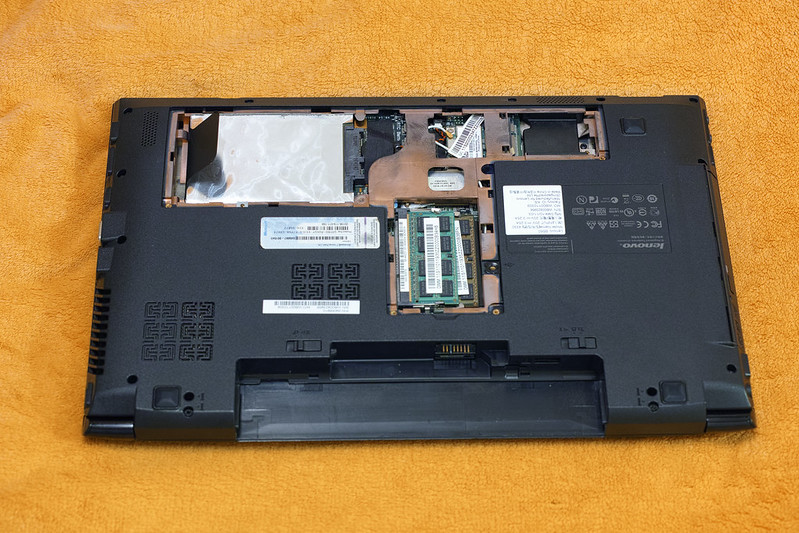 In the next step you have to remove the hard drive and the CD/DVD burner, because their screws can prevent further disassembly. 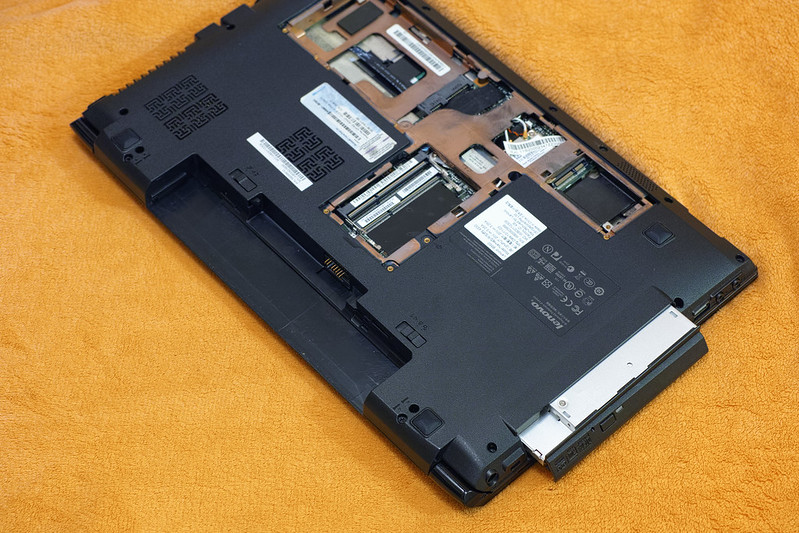 After all the screws on the bottom have been unscrewed (even the three small ones beneath the CD/DVD burner), you have to turn the notebook around and remove a small plastic rail just above the function keys (F1-F12) on the keyboard. Below it is a small screw, which has to be unscrewed, in order to remove the keyboard. 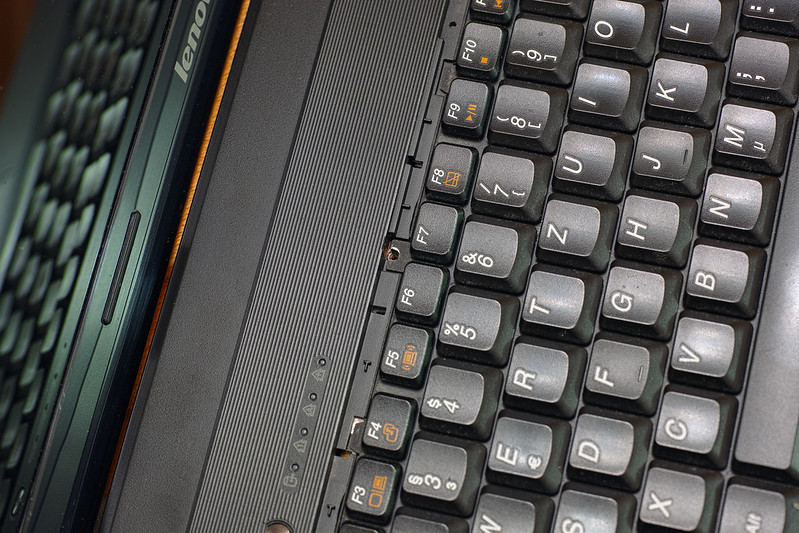 The next step is rather tricky, because several ribbon cables have to be unplugged. After that the keyboard and the upper cover can be removed, in order to reach the motherboard.

Three additional ribbon cables (on top) and two additional cables (down right) connecting various ports to the motherboard (USB, Audio In/Out, etc.) had to be unplugged, in order to be able to remove the motherboard. 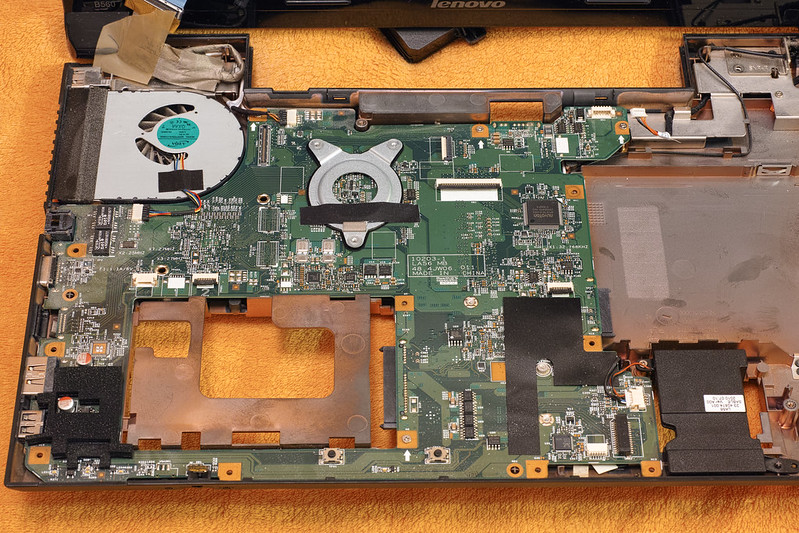 This is how the upper and lower sides of the B560’s mainboard look like. After unscrewing the three screws I could remove the fan including the heat pipe. 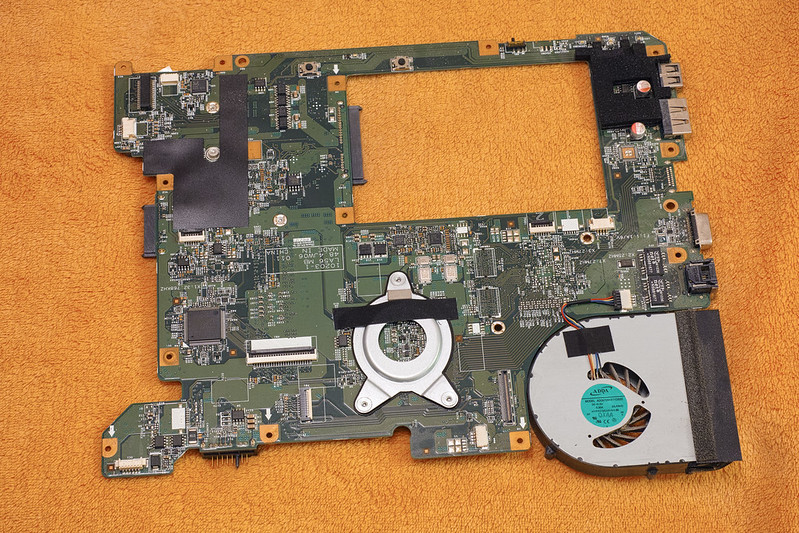 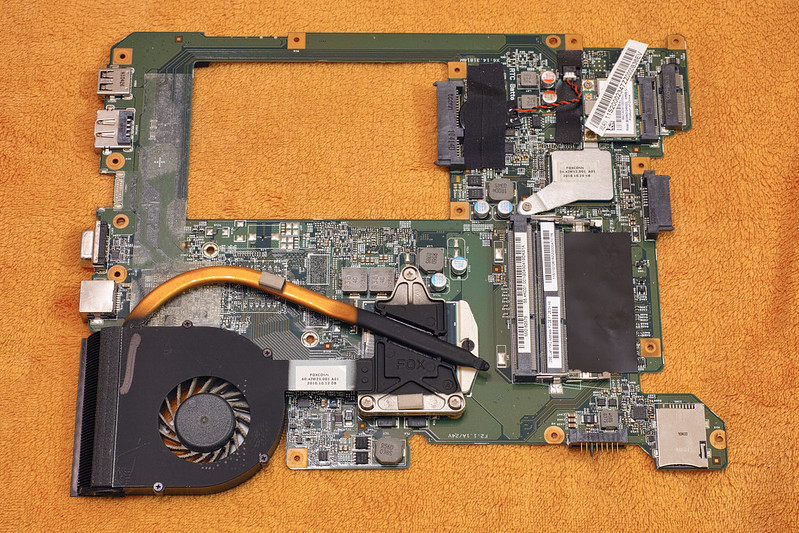 The dried up thermal paste was hard as stone. The little villain wasn’t blocked, but still the electromotor was faulty. 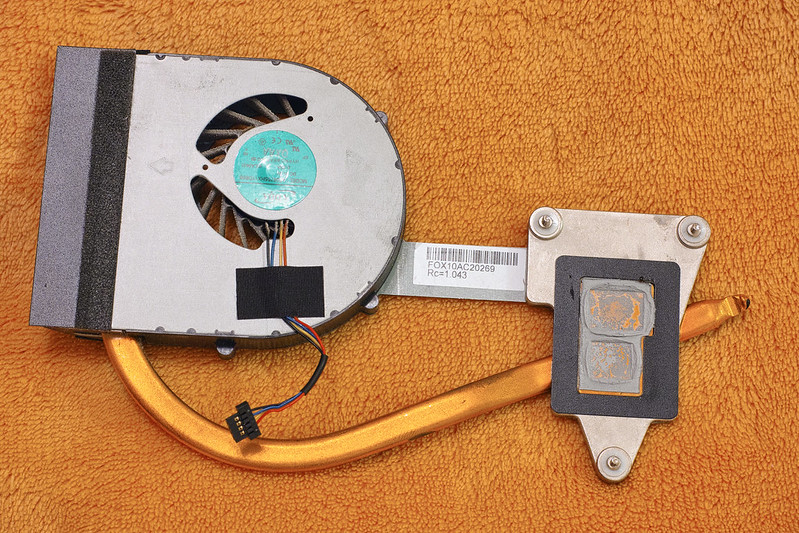 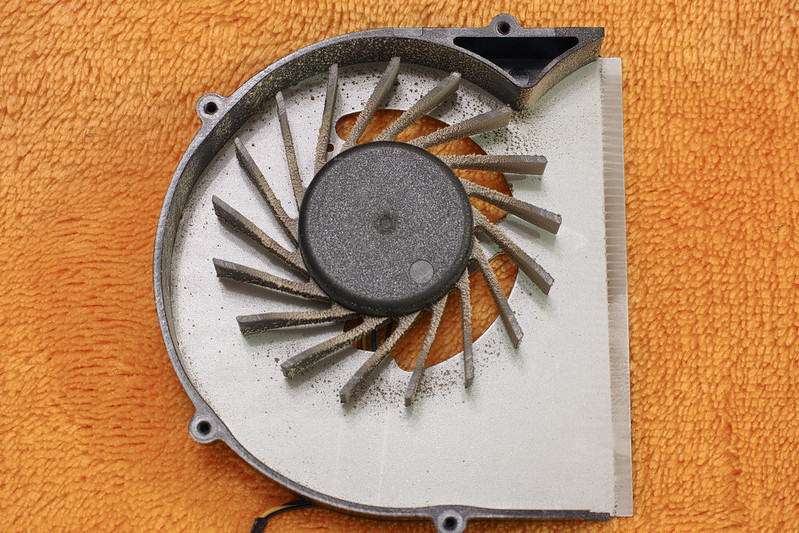 On the CPU there was also a lot of dried up thermal paste that had to be removed from both chips (CPU and GPU, I suppose…) carefully with wet cotton swabs. 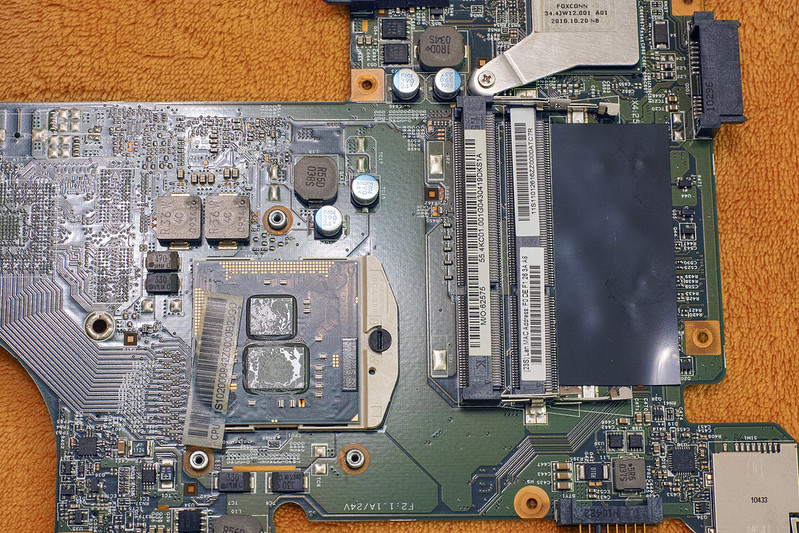 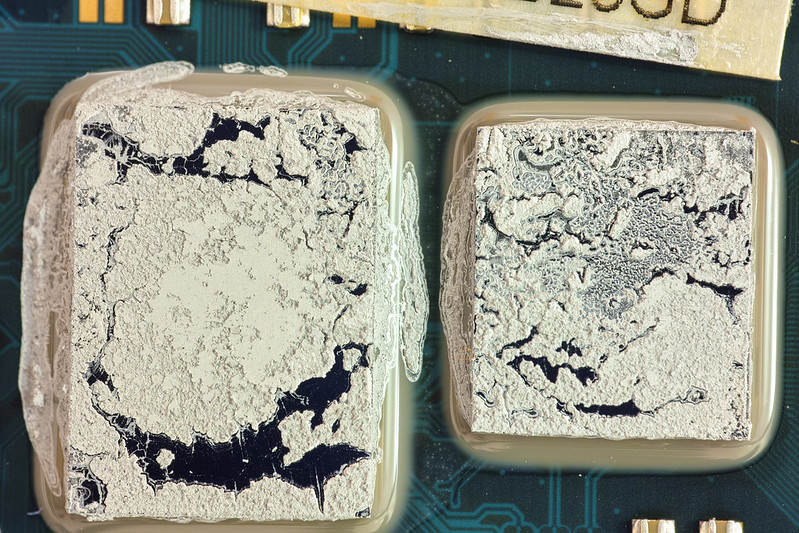 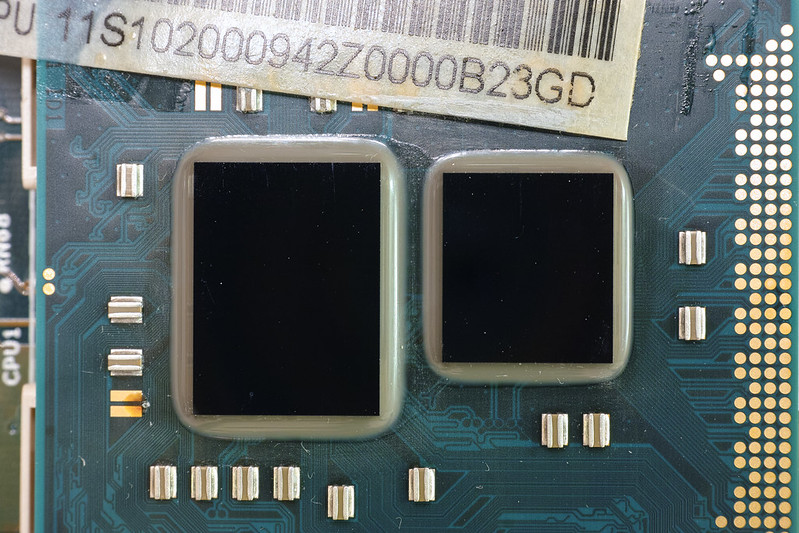 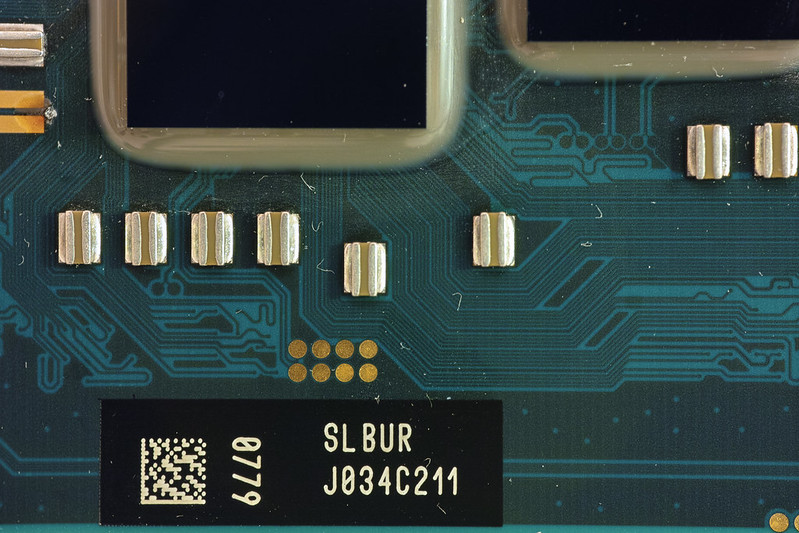 Then, I put fresh thermal paste onto the clean and dry (!) chips – but not too much of it – and then I reattached the fan including the heat pipe.

Afterwards I reassembled the notebook and switched it on. As you can certainly imagine, waiting for the Windows logo to show up was nerve-racking. 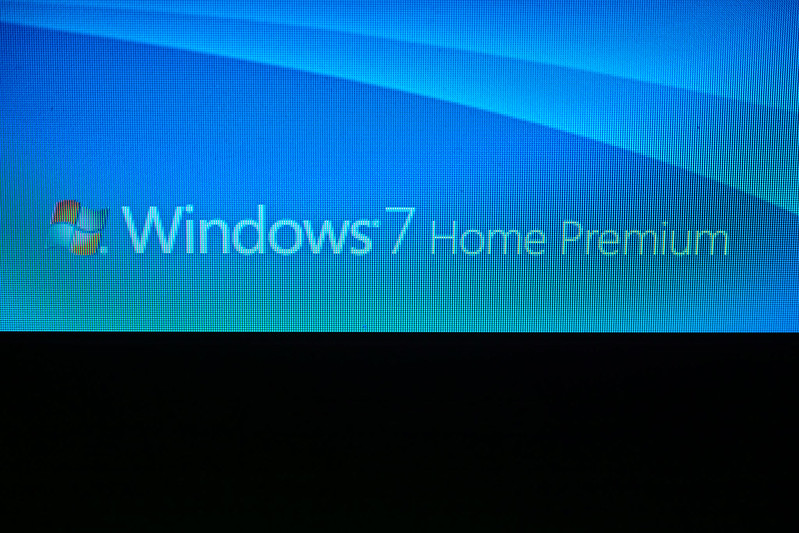 After starting Windows successfully, I first started ThrottleStop and kept torturing the processor for 20-30 minutes with the integrated CPU benchmark. As the new fan began to run immediately, the temperature of both cores didn’t climb beyond 74°C at any time. Thus the fan replacement was a complete success! 🙂

The difficult thing about such repairs is reassembling all pieces. Those without any manual dexterity or technical skills will be more likely to destroy their laptops rather than to fix them. That’s why I advise you against doing such repairs on your own. You better leave this to your neighbor/friend who knows how to do it, or to an expert. 😉