There are people who are prepared to do anything for 15 minutes of fame, regardless of how tasteless it may be. Because, as we all know, there is no such thing as bad publicity. And in current era of social media attention-seekers are getting ever more numerous. The latest incident in the world of photography, which has caused a huge wave of indignation, is the work of Danish photographer Andreas Hvid.

In November Havid had implemented his idea of shooting nude photos atop the Great Pyramid. He released those photos a few days ago and deleted them a short time after that. These pictures show him and a young woman in sexual poses. You don’t have to be sharp witted or sophisticated in order to recognize that provocation rather than photographic results had priority. Had the photos looked like the photographer had put a lot of thought into what he is trying to say with his work, not as many people would be criticizing him. But as things have turned out, Egyptians are not the only ones who would like to see Hvid punished severely. 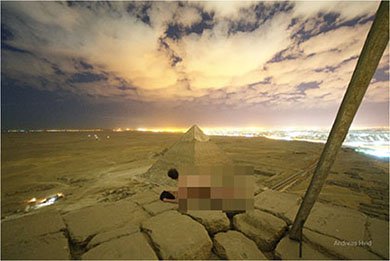