Years after Sharbat Gula has become an icon in documentary photography thanks to a photo taken by famous photographer Steve McCurry she made it into the headlines again. Unfortunately not for a positive reason though. The 45-year-old woman who is now a mother of four children was deported back to Afghanistan, her country of birth. In the beginning of the 1980s she and her family had come to Pakistan, which she called her new home country where she wanted to live and to die. The deportation on the grounds of allegedly having forged papers for which she was even imprisoned for some time is very hard for her.

Steve McCurry had traveled to Pakistan in 1984 where he took pictures in a refugee camp near Peshawar to cover the fate of Afghan refugees. At this time Afghanistan was a country suffering from the war with the Soviet Union. There he met Sharbat Gula whose portrait was published on the cover of an edition of National Geographics magazine, which made her famous as “the girl with the green eyes”.

In 2002 Steve McCurry and a National Geographics team started to look for Sharbat Gula of whom they didn’t know anything else but her photo. He was able to find her with the support of informants in the refugee camp in Pakistan which still exists today. You can read more of this story in the online article of the magazine.

At this time Sharbat Gula was living in an Afghan village, not far from the Pakistan border, where she’d moved in the beginning of the 1990s with her husband and her children. Until then she hadn’t even been aware of the reactions her photo had caused in the year 1985. However, Steve McCurry recognized her immediately as he, according to her statements, was he only one to ever take her picture.

When you open the photographer’s official website on Facebook  you will come across some exclusive postings where he writes about Sharbat Gula’s present state and her return to Afghanistan. Among other things he published the following contribution on October 31:

“It is our understanding from good sources in Peshawar, Pakistan, that she will be released tomorrow, Tuesday.

We should all continue to press the officials to not only release her, but to treat her and her family with the utmost dignity, care, and respect as she prepares to make many important decisions which will affect her children in so many ways, including the continuation of their education.“ 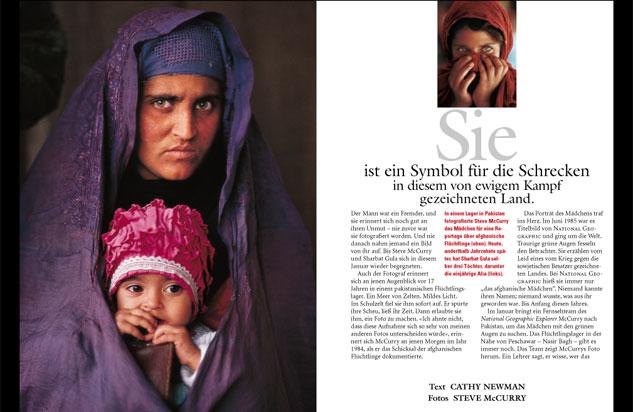